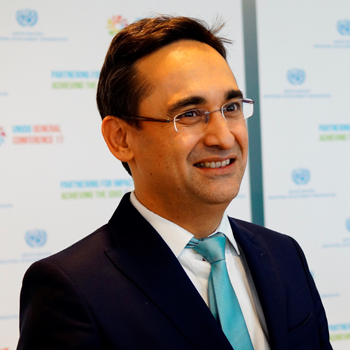 Mr. Farrukh Alimdjanov is an industrial development officer at the United Nations Industrial Development Organization (UNIDO) with nearly 25 years of experience in international organizations, as well as private and public sectors.

He started his cooperation with UNIDO as Deputy Director of the UNIDO National Cleaner Production Center in Uzbekistan in 2006. Since 2007, he has worked as an international expert in the UNIDO Private Sector Development Department. As part of the UNIDO’s Innovation and Digitalization Division of the Department of Digitalization, Technology and Innovation, among others, he is responsible for formulation and implementation of the UNIDO technical cooperation projects focusing on industrial design, modernization, branding, enterprise competitiveness and digital transformation in Africa, Europe and Central Asia, Latin America and Caribbean, Asia and other regions.

Prior to UNIDO (since 2001), Mr. Alimdjanov worked in the Ministry of Foreign Economic Relations, Investments and Trade of Uzbekistan, heading the Department of European Countries in the Information and Analytical Department. He also has 7 years of experience in the private sector.